Leaders of Born again churches in Uganda have requested the government to gazette 2nd April as a day for thanksgiving in honour of the Lord’s mercy onto the country.

Dr. Sserwadda while addressing hundreds of Christians at Ndeeba Victory Christian center, said that this country needs to dedicate itself to God by thanking what He has done for it annually.

Celebrating the National Thanksgiving Day is a way of acknowledging how far the Lord has brought us as a country. Look at the landslides in Bududa, Kasese, Ebola and the latest being the Covid-19 pandemic. We request the government to gazette 2nd of April every year as a Thanksgiving day,” said Sserwadda.

He said that this day is meant to combat the madness and stupidity of the Fools day that falls on 1st of April every year.

Sserwadda said that of 10 people only one remembered to give thanks to the Lord and therefore there is a need to inculcate a sense of appreciation among Ugandans.

“Thanksgiving is biblical and we have to remind our people that it is imperative to give thanks,” said Sserwadda. 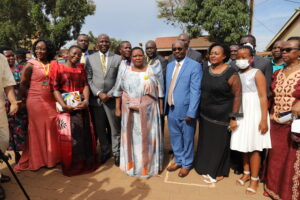 Dr. Sserwadda prayed for the president and the Prime Minister who represented the president at the Thanksgiving prayers organised by Victory Christian Church.

Addressing the Christians the Prime Minister of Uganda Rt. Hon. Robinah Nabbanja assured the people that she will ensure the government is brought closer to the people.

“We want the people to feel the government and whatever we do is meant to bring it closer to the people. If they have problems we can attend to them without waiting for the Head of State who is busy thinking about the prosperity of this country,” said Nabbanja.

She added that the President acknowledges the contribution of the born again churches to both spiritual and material development of the people.

Nabbanja appealed to the born again church leaders to promote government programmes including the Parish Development Model that she referred to as a game changer in the country’s development agenda.

Nabbanja reiterated the government’s commitment to enhance the salaries of the nurses but said she was surprised to hear that nurses and midwives are striking yet their issues were addressed and the government has already budgeted for 495 billion the coming Financial Year.

The prayers were organised to thank God for protecting the country during the difficult times of COVID-19 and saving the lives of Ugandans who were helpless at the time. 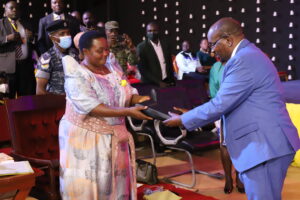 The prime minister Rt. Hon. Nabbanja Robinah receiving a present from Dr. Jospeh Sserwadda on behalf of the president.

The president donated sh20m to the Church while the Prime minister donated sh10m cash.

The Prime Minister also supported the LC I chairperson Tomusange Zone Evelyn Nakiryowa by paying her office rent arrears and paid sh2m ahead after she requested for assistance from the Prime Minister.