The Prime Minister Rt. Hon. Robinah Nabbanja has echoed the President’s caution against land fragmentation, the need for appropriate enterprise selection and support for the Parish Development Model.

“The people of Busoga should no longer be growing sugar cane because land has become scarce and continued engagement in sugar cane is a sentence to remain in poverty,” said Nabbanja.

The Prime Minister was on a working visit in Bugweri District, where she inspected a number of development projects in the area at the invitation of Uganda’s Ambassador to the United Arab Emirates, His Excellency Zaake Kibedi.

Nabbanja warned the people of Busoga against degradation of wetlands saying that the outcome would be disastrous.

“Some people have resorted to wetland degradation by growing rice and even planting eucalyptus trees which is very bad to the environment. People need to engage in fish farming which is Eco-friendly,” said Nabbanja.

She said that the president has advised those with 4 acres of land or less to engage in intensive farming and grow high value crops such as onions, vegetables, poultry, piggery and zero grazing for dairy cattle.

The Premier said that it was high time farmers adopted modern methods of farming if they are to rhyme with changing world trends.

Samuel Mugasi, the Executive Director National Agricultural Advisory Services (NAADS) said that the people of Busoga need to diversify into cattle keeping and also get a perennial crop that can help them earn money all year round.

“Busoga needs a perennial crop that can help farmers earn money all year round and be involved in enterprises such as dairy farming to be assured of daily income, “said Mugasi.

He said that NAADS had started empowering farmers by distributing dairy cows that have now started producing milk and there is light at the end of the tunnel.

A number of challenges facing the Cooperative Society were highlighted and the Ministry of Agriculture, which was represented at the meeting, took note of the issues and promised to address them. 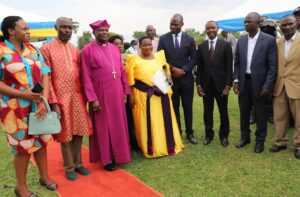 While at Bugweri Youth and Women’s Tailoring Association headquarters, the Prime Minister appreciated efforts being taken to support the government’s policy designed to skill Uganda.

In Buyanga Subcounty, the Prime Minister presided over a fundraising event for the construction of Buyanga Church of Uganda. The construction project requires over 365 million shillings.

The Prime Minister contributed 10 million shillings towards construction of the church. Over 19 million in cash and pledges was collected and pledged to provide iron sheets for roofing the church. 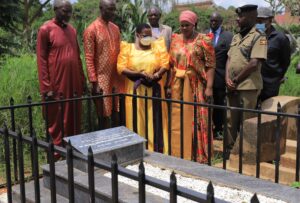 She met the widow and discussed issues affecting her and she appealed for government support in various ways.

Bugweri District is a new district curved out of the greater Iganga District, with a total population of about 125,000 people.

According to available statistics, the economically active population is less than 30% of the total population and 95% provide unskilled labour.