“All programmes that the government is coming up with are aimed at improving the individual household incomes so that consequently their livelihoods are made better,” said Nabbanja. 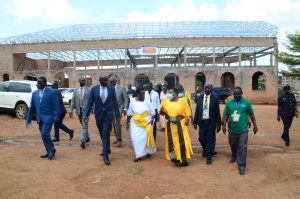 She said that programmes such as Emyooga, Parish Development Model (PDM) and others are all geared towards addressing the 39% category who are still trapped in the non-cash economy.

Nabbanja was on Sunday presiding over a fundraising drive for the completion of Hoima-Kikwiite Church, the headquarters of SDA for Bunyoro region in Hoima city.

She first inspected a parade mounted by children and women of the SDA before proceeding to the fundraising function.

Nabbanja said that some people are waiting for the Government to address their concerns when several programmes aimed at addressing poverty are in their midst.

“You need to actively get involved in government programmes because some opportunities leave you behind and you begin regretting that the government has not helped you”, explained Nabbanja.

Nabbanja asked parents to ensure that they invest in the education of their children if they are to be responsible citizens in future.

“When our current regime of leaders is out, who will replace us if you don’t educate your children?” asked Nabbanja.

The SDA Bishop in charge of Bunyoro Region Anatole Mugenyi, quoting the Bible, asked believers to always give back to God with a willing heart whether young or old. 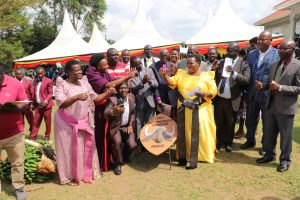 “Take from among you a contribution to the Lord; whoever is of a willing heart, let him bring it as the Lord’s contribution: gold, silver, and bronze. So God tells us to contribute to his cause,” said Mugenyi.

He said that this requirement established for God’s people a fundamental truth.

The mayor Hoima Oil City Brian Kaboyo thanked the government for the establishment of a Blood Bank in Bunyoro sub region.

The Prime Minister contributed 23 million shillings and pledged 450 iron sheets from her office towards the completion of the Church. 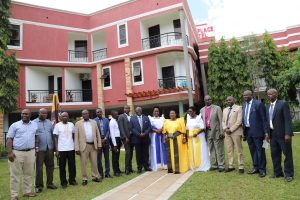 Prime Minister Rt. Hon. Nabbanja Robinah, in yellow Gomesi, with other leaders pose for a group photo at the commissioning of De Place Hotel in Hoima City

The Prime Minister later in the day presided over the commissioning of multi-billion Hotel, De Place Hotel in Hoima City where she thanked investors for creating employment for Ugandans.

“The President has been clear that investing in services will create jobs for our people and he supports all investors who are creating jobs for Ugandans,” said Nabbanja.

The proprietor of the Hotel, Salongo Bingi Kawiso told the Prime Minister that government agencies such as Uganda Petroleum Authority (PAU) and Uganda National Oil Company (UNOC) have not helped the local proprietors in terms of offering them contracts.

In response, Nabbanja promised to meet the said agencies to address the concerns raised by the proprietor.