The government has commissioned the newly established Morulem Community Police Post and staff accommodation facilities in Abim District aimed at improving safety and security in the district.

The facility is one of the seven community police posts being constructed to boost security in seven districts in Karamoja under the Development Initiative for Northern Uganda (DINU), a government of Uganda programme supported by the European Union and supervised by Office of the Prime Minister (OPM).

At the occasion of commissioning the facilities on November 29, 2022, the Minister for Karamoja Affairs, Dr. Mary Goretti Kitutu, said OPM has partnered with the Uganda Police Force (UPF) under the DINU programme to build capacities of officers and increase police presence in Karamoja to promote economic development in the area.

In a speech read by Mr. Gonzaga Mayanja, the Commissioner Monitoring, and Evaluation, Local Governments at OPM, Dr. Kitutu explained that DINU is an affirmative action programme of the Government of Uganda and that OPM is responsible for the supervision, coordination, and accountability of the various actions under the programme.

“Today, OPM hands over this investment and facility to UPF and the targeted communities for their benefit and use. As a government programme, we believe that this police post will contribute to increased presence and functionality of community policing, community awareness of the role of UPF in safety and security, and promotion of human rights activities in Karamoja,” she said. 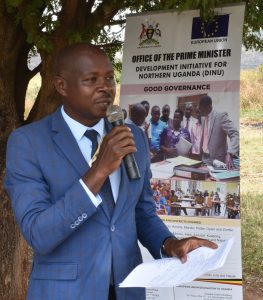 The Minister hailed the European Union for supporting the Government of Uganda in building UPF capacities in Karamoja, a sub-region that has been hitherto facing insecurity challenges, including cattle rustling activities.

“Through the various financing agreements with the Government of Uganda, the European Union has continuously supported UPF in building the force’s capacities in community policing and promotion of human rights in Karamoja Sub-region. I wish to thank the European Union for this support,” she said.

Mr. Mayanja, who represented the OPM permanent secretary, said more than 500 police officers have been trained in community policing methodologies, communication skills, anti-torture, and human rights among other areas aimed at ensuring that the facilities are functional.

The UPF Director of Research, Planning and Development, AIGP James Ocaya, said Karamoja Sub-region has had a long history of insecurity which has led to low levels of development in the area.  He said the police posts have been established to foster security and stability in locations that were previously regarded as blackspots for warriors and raiding activities.

“This intervention is very timely since it will contribute tremendously to reducing the incidents of insecurity in the sub-region,” he said.

“The UPF management would like to thank the European Union and Office of the Prime Minister for continuously supporting police over the years, especially in Karamoja Sub-region. The intervention has had greatly enabled UPF to have tremendous achievements as far as executing the mandate of providing safety and security is concerned,” he said.

In 2018, the UPF signed a memorandum of understanding with OPM under the DINU Multi-Annual Programme Estimate (MAPE) result area three: Improved safety and security in Karamoja through increased presence and strengthened capacities of the Uganda Police Force.

Under the programme, UPF is expected to:

The Development Initiative for Northern Uganda (DINU), a Government of Uganda programme supported by the European Union and supervised by Office of the Prime Minister, was initiated in 2017. OPM is responsible for the overall supervision of the EURO 150.6 million programme in partnership with local governments and a wide range of stakeholders, including implementing partners – Department for International Development (DFID)/Trademark East Africa, Deutsche Gesellschaft für Internationale Zusammenarbeit (GIZ), United Nations Capital Development Fund (UNCDF), and United Nations Children’s Fund (UNICEF), and Uganda National Roads Authority (UNRA).