The participation of both community members and the local governments in the implementation of the DINU programme activities is critical for sustaining programme gains and promoting ownership.

“If you wait to involve local government until you’re phasing out, it doesn’t work so well,” says Mr Bernard Obin, the Kotido District Agricultural Officer.

He says, “They won’t understand the concept of the whole thing. It is better to involve the local government from the start so they will feel part and parcel of the implementation.”

DINU implementing partners and staff have seriously considered this philosophy and are coordinating programme planning and activities closely with local government departments. Staff members have always teamed up with government agriculture extension officers and government health surveillance assistants each day in the field. The development has led to tangible results.

“Going to the community daily has increased my work motivation. It encourages me to solve the problems that the community is facing,” says Mr Obin, who is also the Kotido District DINU focal point officer. 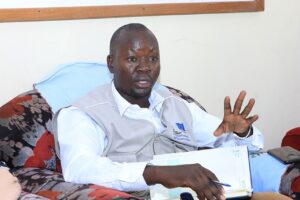 Mr Bernard Obin, the Kotido District DINU focal point person, credits the project for changing lives of the people, and believes even if it exits, the gains thus far will not be in vain, and as a district, they will build on that

Before working with the DINU, he used to visit communities once or twice a month. When he began coordinating his work plans with the project staff and partners, he started visiting communities every day. The time paid off. There is a potential for malnutrition rates to reduce and not as bad as they were previously, children are weighing as expected at growth and monitoring sessions, and households in the sub-counties having DINU intervention have kitchen gardens.

Agricultural officers in the DINU districts are also seeing farmers getting higher yields on the same small pieces of land, thanks to watershed conservation, conservation agriculture and small irrigation schemes for the few that can afford.

“There is fear that all our gains will be lost once the funding ends in September this year, but I am positive that we will still sustain the programme activities when DINU stops,” he says adding: “It will never end. The intervention is tangible and the people who were once so disinterested have picked interest and will carry on. In Karamoja, it’s very hard to change the mindset of the people, but if you manage to, they adopt that behaviour and it becomes part of their lives – so, I am sure all gains will continue.”

Mr Obin’s words sync with what Mr Charles Komakech, the Moroto District chief administrative officer (CAO), believes about the European Union-funded DINU programme. To him, the most important achievement of the DINU project has been changing the mindset of hundreds of people in the Karamoja Sub-region. Moroto District CAO Charles Komakech in a recent meeting with the DINU team. To him, the greatest achievement of the DINU initiative has been changing the mindset of the people in Karamoja

“There is a growing presence of kitchen gardens that are remaining green all throughout the year and these continue to grow bigger at different households. For a community that was predominantly pastoralists, that is a huge success. Back then, Karamojongs used to soak seeds meant for planting overnight and have them for meals the next day – that has changed,” Mr Komakech explains.

He equally believes that the distribution of goats to women to improve nutrition has also seen a behavioural change among men in the community. “Lately, men feel owning a goat should be left to women, and cows to them. This looks like a small thing but it’s a significant stride made in regards to achieving gender equality because women in this community never owned anything previously. We are indeed moving in the right direction, and this I fully credit to interventions by the DINU project.”