The people of Teso sub-region have appealed for more funding from the Development Initiative for Northern Uganda (DINU) to support improvement of livelihoods. This was during meetings with the Minister for Teso Affairs Hon. Dr. Kenneth Ongalo-Obote while monitoring the performance of DINU projects in Katakwi, Kapelebyong and Amuria districts from 24th to 30th April, 2022.

The Minister made on-spot checks on the progress of construction of the market and a breast feeding center in Obalanga village in Katakwi District, inspected the newly commissioned 4 classroom block and office block at Obalanga Comprehensive Senior Secondary School funded by the Ministry for Teso Affairs.  Dr. Ongalo-Obote also handed over cheques worth 130 million shillings to different farmer groups. He urged them to use the money constructively to improve their livelihood and not to spend it on drinking alcohol. “When the program leaves, you should have a foundation to stand on. Hope you will eventually be able to stand on your own, so that we can also support other people.” he said.  He clarified that no one should ask them to pay money to join a SACCO, they only need to form groups, open an account and ensure that they start activities in line with those that are funded under the Parish Development Model, and government will deposit their funds in the bank.

Johnson Owaro the DINU Regional programme coordinator explained that DINU interventions in a district depend on the needs of the community. “Every community has different interventions depending on the need. In Katakwi there are challenges of insecurity. Therefore, DINU is supporting the district by constructing police posts in places identified by the community. These police posts were already functional under shoddy structures and others were operating under trees” he explained. Owaro said that DINU is focusing on enhancing livelihoods of vulnerable communities mainly in food production, capacity development, savings and family planning.  Teso region also had challenges of water scarcity during the dry season. Therefore, DINU intervenes though desilting old dams and building new ones. The program also works on provision of communal water through drilling underground water and providing of hand pumps like the case in Obure village. 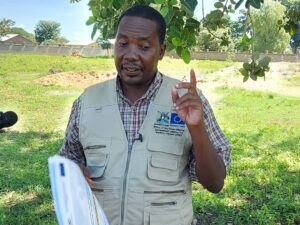 Despite the prolonged dry season the region has faced this year, many places were already flooded, water logged and gardens were destroyed by water. The Minister advised the people to protect the indigenous trees and plant more fruit trees instead of the eucalyptus and pine trees that cannot withstand the weather conditions in the region.  Dr. Ongalo Obote also asked group members to encourage men to join them to avoid problems that might arise when women have to participate in group activities.

Geoffrey Omoro the LC V chairman for Katakwi District complained to the Minister that some people are being paid only 100,000 shillings as compensation for each cow under the restocking programme. However, the Minister informed them that government is committed to paying them off but in a phased manner. “We don’t have enough money to pay everybody in one year, though we would have loved to do that. Government does not secretly pay people cash. When the time comes, everyone will be called and registered. Investigations will be made, those who lost their animals will show proof for the number of animals they lost, and will be paid the value of what they lost. Government does not pay cash, it pays through bank accounts, he clarified.  He informed the gathering that the restocking programme stopped in 2019 and government is now implementing the Parish Development Model. Cattle compensation is being handled by the Attorney General’s office and not by OPM.

During the monitoring, Dr. Ongalo Obote handed over food processing machines such as food sun dryers, rice hullers and others.  He also toured a produce storage facility constructed for Acowa farmers’ initiative in Kapelebyong District with funding from European Union and Government of Uganda. This is to build resilience to improve food and nutrition security, incomes and health.  He toured the cattle markets in Wera, Amuria District. He promised to buy iron sheets for Ogutoyi Primary School that lost its roof due to a wind storm and to lobby for seedlings which he will deliver when the planting season starts.

The various livelihood projects are part of the 26 million Euro funding from the European Union designed to consolidate stability in Northern Uganda, eradicate poverty and under-nutrition and strengthen the foundations for sustainable and inclusive socio-economic development. The funding of various programmes under the Development Initiative for Northern Uganda (DINU) Programme funded by the European Union (EU) under the 11th European Development Fund (EDF) and is benefiting 33 districts in Acholi, Karamoja, lango, Teso, West Nile subregion for a duration of six years. DINU started in 2017 and ends in 2023. It targets a population of over 7 million people.

The main objective of DINU is to reduce the development gap between Northern Uganda and the rest of the country by focusing on three areas: Nutrition and Food Security, Road Infrastructure, and Good Governance. DINU is supervised by the Office of the Prime Minister, it was awarded to CARE Denmark led Consortium comprising of Catholic relief services(CRS), Gulu Agricultural Development Company (GADC), Dynamic Agro Pastoralist Development Organisation(DADO) and SORUDO. The consortium is implementing DINU in eleven districts of Abim, Kitido, Karenga, Kaabong, kitgum, Moroto, Amudat, nakapiripirit, Nabilatuk, Napak and katakwi.