‘Be disciplined and love your country’ PM urges the police force

The Prime Minister of Uganda Rt. Hon. RobinahNabbanja  has asked the police to ensure that they are disciplined and that they love their country if they are to serve the public diligently.

Nabbanja said that discipline was key in the police force and was a great determinant to grow in ranks.

“A disciplined police officer will never go wrong and it is easy to promote such officers. You need to transcend above trivial issues so that you can serve the public well,” said Nabbanja.

She said that when the public learns that the police officers can be compromised with small things, it affects the security of the country. 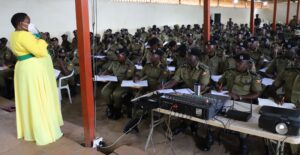 Nabbanja made the remarks while addressing 198 Officers in Charge (OCs) of police stations drawn from all over the country at Kabalye Police Training School in Masindi District.

The Premier assured the police officers that the government was aware of the challenges they face and promised to address them especially on accommodation.

“We are a developing country and we know that you are operating in a situation of lack but I will work with the line Ministers to sort out your challenges,” said Nabbanja.

She cautioned police officers against working in isolation in the communities because it is practically impossible in executing their duties.

“You should work with the local leaders and the community if you are to be relevant in places where you are posted. Team work is key in service delivery,” said Nabbanja.

The Prime Minister asked the police to be patriotic and love their country.

“When you are patriotic and love your job, work becomes easy and service delivery will be made easier,” said Nabbanja.

She asked the police to always plan and evaluate their work in order to improve on their mode of operation.

“You need to hold meetings with fellow police men and women on a daily basis so that you execute your roles well. Plan with them and work with them for better service delivery,” the Prime Minister  added.

She donated sh5m to the police officers undergoing training for bull roasting. 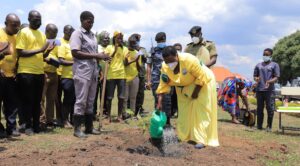 In a related development Nabbanja also presided over the closure of training for local leaders from Masindi district right from the village level and asked them to ensure they supervise government programmes for quality work.

“When you don’t supervise work and the contractors do shoddy work you will be questioned by the people who entrusted you with power and authority. So you must be vigilant to ensure there is value for money,” she said.

Over 998 leaders including LC I, LCII, LCIII chairpersons, Councilors at all levels, chairpersons of special interest groups were trained in leadership roles and oriented in patriotism.

The Minister for Local Government Hon. Raphael Magyezi was the chief facilitator at the climax.

Magyezi asked the local leaders to be fillers on ground for the government to ensure the people get the services needed.

“You are the leaders on ground and if you don’t exercise your powers, service delivery will be compromised,” said Magyezi.

Rose Kirabira, the outgoing Masindi Resident District Commissioner said that the objective of the training was to orient the leaders on their roles so that they can help the government to offer services.

The president donated sh30m to the leaders to help them in transport back to their respective areas. 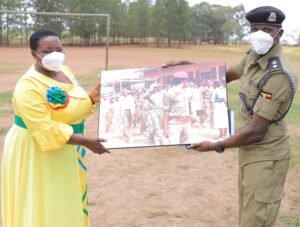